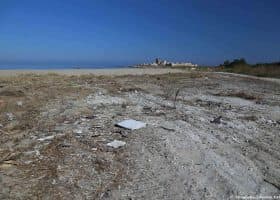 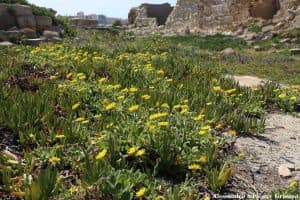 All currently known sites are located in coastal areas subject to several forms of disturbance that in extreme cases lead to the destruction of suitable habitats. The most impacting disturbances are connected with the massive anthropization of the coastline, which has intensified since the Second World War, due to the construction of many private houses and bathing facilities, as well as several industrial buildings (e.g. sawmills for stone materials processing). Calendula maritima has consequently disappeared in large areas along the coast (San Vito Lo Capo, M. Cofano), and has become rarefied or extinct even in island contexts, theoretically less exposed to heavy anthropization (e.g. Isola Lunga and Favignana).

In many cases, the anthropic impact results in a more or less intense degradation of plant communities in which the target species lives, mainly due to soil pollution-eutrophication phenomena and the diffuse presence of inert and waste dumps. Moreover, dumps promote the demographic increase of seabirds colonies that populate the small islands of the area, involving direct and indirect forms of exclusive disturbance of the microinsular contexts (e.g. soil eutrophication, predation and trampling) especially during the reproductive season.

Many populations are concerned by phenomena of genetic pollution due to hybridization with a congeneric species, Calendula fulgida Raf., which in many cases coexists with the target species. This issue represents a severe threat to the conservation of Calendula maritima, since in the medium/long term perspective, the target species could progressively regress at the advantage of hybrid entities, which are theoretically endowed with greater resistance and adaptability than the parent species.

Moreover, the anthropization of coastal ecosystems indirectly favors the colonization of Sea Marigold thanks to its more remarkable ruderal features, inducing the spread and/or dominance of hybrids.

3 – Seasonal disturbances related to the coastal use

Various types of mechanical disturbances (e.g. trampling, collection of plants and flowers, etc.) are strictly connected with improper use of coastal areas during the tourist season. With this regard, the realization of facilities (kiosks, cabins, access roads, etc.) linked to the seaside activity, or the mechanical cleaning of the beaches to facilitate the use of bathers, are of heavy impact. In some cases, the a major risks rely on the creation of temporary roads and paths to facilitate the access to the bathing areas, or by the direct passage of motor vehicles across the nuclei of Sea Marigold, with consequent habitat degradation and mechanical destruction of many plants.

Moreover, the summer season coincides with the dissemination phase of Calendula maritima and represents the most critical period for the survival of individual plants, which must face more or less prolonged drought periods.

Insular environments, as circumscribed and often simplified territorial contexts, generally appear more vulnerable to invasion by exotic organisms. The naturalization of numerous exotic plants began as early as the 19th century, and today some of them behave like dangerous invasive, capable of severely threaten the survival of many endemic species of the Sicilian coasts. With this regard, it should be noted that global warming could be invoked as one of the main factors responsible for the notable increase of naturalization and invasion recorded in Sicily during the last decades.

As for the area of interest, Carpobrotus sp. is among the most dangerous invasive plant species. It is a genus of plants that has already shown strong invasive behavior in almost all the Mediterranean climate areas of the world in which it has been introduced. With regard to the Sea Marigold populations, more or less large patches invaded by Carpobrotus are present in about half of the target species sites all along the coasts of Trapani and at the Colombaia Island. Although at the moment the impact on Sea Marigold is rather modest and circumscribed, the potential risk depends on the ability of Carpobrotus to become dominant within the invaded plant communities, prevailing over all native species by subtracting water, nutrients and vital space. Furthermore, it influences indirectly the local vegetation by altering the soil chemistry, decreasing the pH and raising the nitrogen and salinity content, hence provoking profound changes to the native plant communities in terms of wealth, diversity and composition.